I lived in the US from August 1988 through July 1993, and have been back in The Netherlands since then.

I live alone with my two cats -see below.

My hobbies are cats, reading, BookCrossing, roleplaying, 3Scapes MUD, various crafts, writing stories, and doing the Internet-thing. I also like warm weather, chinese food, going to SciFi conventions and fantasy fairs, and lots of other things. I really like going barefoot; not just on the beach but everywhere. I am not a fetishist; I just wear no shoes. If you're into foot fetishes please don't mail me, there's plenty of people who are interested. I am not.

Some things I don't like are rain and cold weather (although walking in the snow is sort of fun -too bad we usually just get lots of rain... or it gets icy and that's no fun either since I depend on my bike and public transport, I don't own a car). Also phone calls, spammers, guys who don't know the meaning of the word 'no'. I can also really get ticked off at racism and other forms of discrimination, including discrimination based on appearance ('no shoes, no shirt, no service' signs and such like). Especially when such things are so common that many people believe it to be some Health regulation or law, which it is NOT! (see letters from the Health Departments)

I do dislike pit bull type dogs, unlike people dogs are bred for a specific purpose, and a fighting dog does not make a safe family pet! See here for more info.

I am strongly Pro-Choice, and am interested in several Nature-based religions, exploring paganism, wicca, Native Indian religions, and ancient shamanism/animism.

I like reading and watching "V", Douglas Adams, Robert Jordan's Wheel of Time, Terry Pratchett's Discworld, Harry Potter, and SF/fantasy in general. I have also read Tad Williams and enjoy his books a lot. Another good writer is Peter Schaap, who writes Dutch fantasy often set in Prehistory but also in different times and settings. His last 'Stormbreker' was excellent. Unfortunately he has not been translated into English as of yet, but if you're Dutch check out his books some time. Non fantasy/SF books I like include the 'Cadfael' series by Ellis Peters, the 'The cat who..' series by Lilian Jackson Braun, and books by Nevil Shute. And really many others, too many to name them all :)

My favorite cartoons are Sherman's Lagoon and Rose is Rose, which I read on the web. Luann & For Better or For Worse are cool, too. Dutch newspapers have very few toons, just one or two instead of a couple pages like most US papers. The Dutch comic I like best is Fokke & Sukke.

Anyone who has any "V" books, collectables or other things laying around that they want to get rid of, let me know! I still miss a few of books and they are really hard to find here in the Netherlands.

Here are a few more pictures of me:
At work in the historic theme park Archeon.
Me with some big parsnips I grew.
Me as a witch at a party. 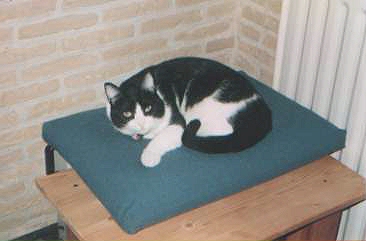 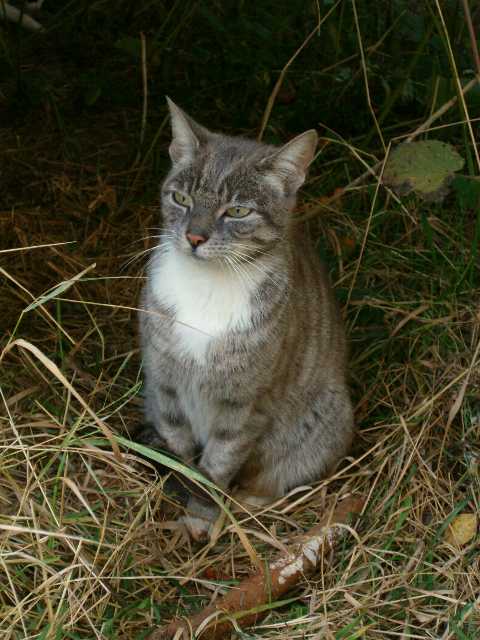 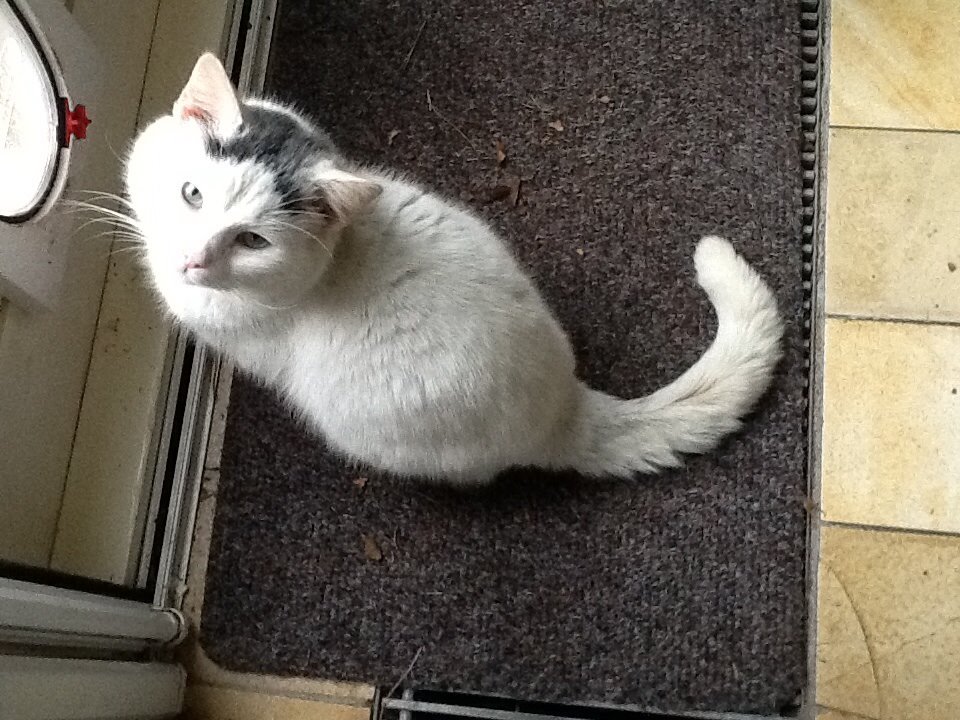 These, of course, are the most important members of the household, Zeerox, Silvie and Paultje. Zeerox was my cat for nearly seventeen years, unfortunately he has died this Jan. 2, 2009 at the age of seventeen years and ten months, after years of slowly progressing chronic kidney failure. He liked to hog my pillow, lay on my back when I laid on the bed reading, generally liked to sleep on the bed (and preferably on top of me) at night, and when he was younger he'd leap up on the very small restroom fountain to drink from the tap.

Silvie is a younger cat, she was probably born in 1999 or 2000, but since she's a rescue I don't know her exact age. She showed up at my work one day with four kittens in October 2003, and I took her home when the work season ended in November. I planned to get her socialized and adopt her out but well, she had other plans! She talked me into letting her stay by following me around like a puppy. She goes out a lot and used to bring mice inside (often alive). Possibly she did this to try to teach Zeerox to hunt; she has mostly stopped since he got too old to help me chase them out again.

Paultje came to our house as a stray, he was the neighborhood Tomcat for several years and he would come in through the cat flap and eat from Silvie's food. He was also the only cat she tolerated. At first I thought he had a home elsewhere, and was just coming into other peoples' homes to steal food -thus his name, after Paul Lekkerbek, an (in)famous Dutch 'food pirate' known for visiting restaurants and leaving without paying. But over time in 2014, I noticed he was not getting the minimum care, was outside on New Year's eve with the fireworks, had lots of ticks and fleas.. so I started searching for his owner. I didn't find any, just more people who knew him as a stray, so I eventually adopted him. Later I did find one family that used to care for him, but as an outdoor/stray cat. They would feed him but they could not take him in because he did not get along with their own cat, and they did not claim him as their own. I did learn he was called Vlekkie and was about 8 years old. I now call him by either name, or by his nickname 'Grote witte wat' (literally, big white cottonwool, but it's also the Dutch word for 'big softie'). Since that's just what he is, a big softie... he used to growl when I picked the ticks off him but he never actually did anything, and he lets Silvie push him around while she's half his size!

Here's a few more pics.
Zeerox loves fur
More fur & my feet
It's his bed, but I'm allowed to sleep in it at night.
A bit dark pic, but I did catch him with his mouth wide open! Look at the sharp teeth :)
And several more on my Facebook site, More cats!

Zeerox is an American kitty I took with me from Dallas. I compiled a little file with our experiences, since there are quite often questions in the newsgroups about flying with cats.

It's hard to believe now, but at one time he was much too fat, and he was put on a diet on nov. 27, 1999. He lost quite a bit of weight over the next two or three years due to the diet, and once he got his kidney trouble he got thin quickly. In the end he was very thin, and even got lame and had trouble walking from loss of muscle tissue. However he did have an appetite and seemed relaxed and happy when just laying around -which had been his favorite passtime for quite a few years, not being the most active hunter/stalker even in his younger years. Until the very end he managed to find a way to cope with his progressing disabilities by such tricks as walking along the walls for support, switching food bowls with Silvie so he could lean against the door post, etc, showing much more determination and intelligence than ever before. Earlier, he had always seemed sweet but a bit dense, several times getting stuck behind a fence outdoors and one time even indoors on the rafters, but this past year he showed he could figure out a way to get around when he really had to! Sadly all things must come to an end and over the holidays even his brave determination could no longer keep up, and he complained even when laying down in his favorite corner spot. During his progressing illness I had hoped he would die quietly at home, unfortunately that was not to be. I took him to the vet's on Jan. 2nd, when the day before he could no longer eat, and that night even drinking was very difficult. Goodbye my brave, strong Zeerox-cat!